The port takes an important step towards emission-free shunting. Four YT203EV terminal tractors started operation at the end of 2021. The entire fleet will be electric in the near future. 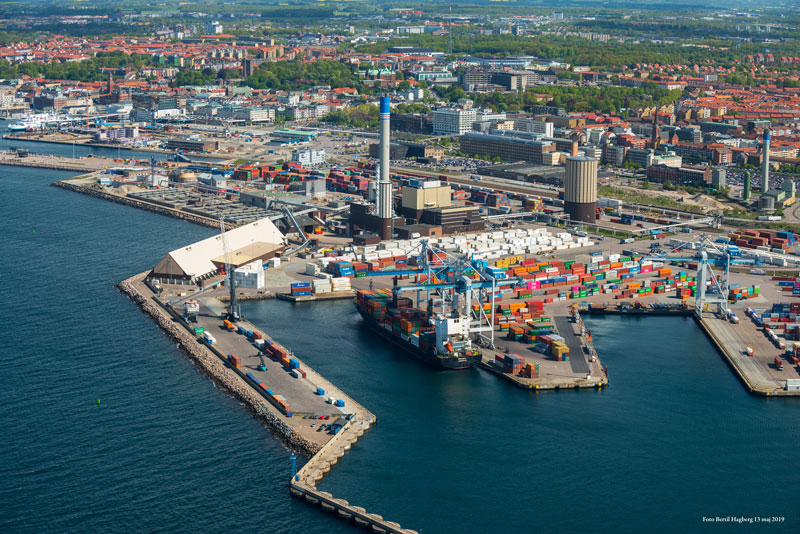 The Port of Helsingborg is working hard to become a fossil-free port and strengthen its position as Sweden's most sustainable port. Their fleet of 25 passenger cars is electric, the giant dockside cranes are electric, and at the end of 2021 four new electric Terberg terminal tractors started operation. All these efforts are to reduce greenhouse gas emissions.

New port in sight
At the same time, the Port of Helsingborg is in the process of a major expansion project, to be completed in 2028. This is due to the increasing volumes of goods, rising water levels and the desire to move port activities further away from the city centre. It is also part of the green transition and efforts to maintain its position as Sweden's second largest container port.

“We are working on a major innovation project, we want to switch to fossil-free vehicles for all our operations. We have got off to a good start with the electric vehicles at the port. The entire fleet will be electric in the near future. We are even considering self-propelled container movers in demarcated port areas”, explains technical manager Christina Argelius from the Port of Helsingborg.

First move
The arrival of the four brand new Terberg YT EV terminal tractors has attracted attention in the transport industry and the Port of Helsingborg is happy to report on them in the media. The interest underlines that there has long been a need for environmentally friendly, sustainable and high-performance equipment at the heavy end of the scale. The new Terberg YT models also mark a technological turning point. “We are proud to be the first movers in green transport. It is exciting to be a part of this technological development, which fortunately continues undiminished. It makes good sense to work with the green transition at the port for the sake of our customers, the city's citizens and our drivers, who have a better working environment”, says technical manager Christina Argelius of the Port of Helsingborg.

The harbour in Helsingborg is like an anthill, with intense traffic of goods, ferries, employees and others working in it. The port is a hub in southern Sweden, where the goods pass from the sea, roads and the railway, which runs all the way down to the port.

Dock cranes, 70 vehicles and 215 employees serve customers with container handling, bulk, passenger ferries, shipping routes, etc. Innovative technology such as the Terberg YT203-EV sets new technological standards. It is designed with as few moving parts as possible, which reduces maintenance costs. The electric tractor emits neither CO2 nor NOX and complies with a number of strict environmental requirements. The lifting capacity is 36,000 kg, the driver comfort is excellent and of course it can withstand the harsh weather at the port.

Everyone has to be quick when a large container ship docks. Then the signal sounds for the operation to unload thousands of containers from the ship. The huge cranes swing into action with the greatest precision and a column of Terberg terminal tractors keeps each ready to receive a container and take it to the yard. Here it is lifted off the terminal tractor by a reachstacker and the terminal tractor continues its approximately three kilometre route back to the quay.

Infrastructure with chargers
The port area with the heavy transport is a challenging working environment to electrify. Therefore, a carefully considered charging infrastructure is provided, based on the driving routes, workshops and accommodation for the drivers. The new Terberg YT203-EV can make a stop of a few minutes for a top-up charge from a number of high power DC chargers, or be charged during a break or after the end of work.

“We are adapting to the new technology, as we need to update safety procedures, teach drivers to optimize driving and expand service readiness together with our suppliers. We think electric vehicles are very promising and we will definitely get more in future. We have embarked on a new and very exciting chapter in the port's history”, says technical manager Christina Argelius of the Port of Helsingborg.